The Spanish Ministry of Defence has selected an Israeli developed jammer, Netline, to protect its army vehicles from improvised explosive device (IED). Netline was selected after competing with eight companies. The contract is valued at 65 million Euros.

Israeli company Netline has developed a family of jammers that are capable of neutralizing different types of remotely operated IED’s.

According to Yallon Bahat, Netline’s CEO , the Jammer continuously broadcasts interfering radio signals across a broad range of frequencies commonly used for hostile comm’s and to trigger RC-IEDs. Fully programmable using Netline’s latest generation jamming technology. Jammer programming is accomplished by connecting a laptop computer, loaded with Netline’s JCC (Jammer Configuration Center) software, to the jammer via LAN. Each band module can be programmed to block either the entire frequency band (broadband) or to limit jamming to selected channels per band. Jamming can be optimized by allocating different power levels to each sub-band. 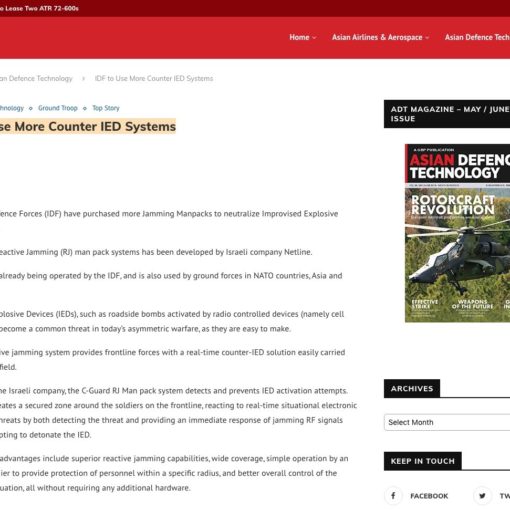 Netline has recently won a series of contracts in the Asia-Pacific region that strengthen its position in the region, the Tel Aviv-based company […]

D&S 2019: Netline is jamming with heads of state